Summit vs Bend – the biggest football game of the year

You may want to get there early to grab a good seat for what looks like a battle for the Intermountain Conference, when the only two unbeaten IMC teams face off on Friday night at Summit High School at 7pm.

The Storm have won the past three games, including a wild 17-14 game in 2013 that came down to the final play and ended in controversy. The last two games have not been close, with Summit pulling away. Bend had won the previous eight meetings before this streak and come in as one of the hottest teams in the state.

Some of the facts:
• Combined, they have beaten all the other IMC teams.
• Bend (211 points) is the second highest scoring Class 5A team behind Eagle Point (221).
• Summit is the 4th stingiest defense in 5A giving up 21.6 points per game.

Summit’s Dawson Ruhl has emerged as candidate for state player of the year as a do it all running back who has even filled in at quarterback when the reigning Class 5A offensive player of the year John Bledsoe went down with an injury earlier this year. Bledsoe is back looks to cap off an impressive prep career before heading off to play football at Northern Arizona.

Bend is led offensively by one of the top running backs in 5A in Daniel Bazan. Quarterback Chase Lettenmaier and receiver Ryan Stanley have connected for over 300 yards and four of Lettenmaier’s nine touchdown passes.

Summit, which is ranked No. 1 in the latest OregonLive media poll in 2nd in the OSAA power rankings, just behind Wilsonville (5-0). Bend sits in 6th in the current power rankings. 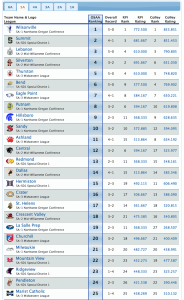