Crook County volleyball back on top 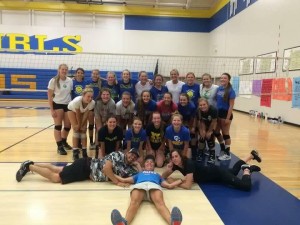 The Cowgirls haven’t won a state volley championship since 2013. That’s not a long drought, but considering that ended a run of eight-straight state titles, 2013 may seem like a while to Crook County.

Crook County is a perfect 16-0 in 2016 and currently ranked No. 2 in the OSAA Class 4A Volleyball Power Rankings. The only team ranked ahead of them is Valley Catholic (13-1), whose lone loss this season was 3-1 to Crook County.

The third-ranked 4A team in the state is Sisters (14-2) who has lost to Valley Catholic and to 5A Bend, which is ranked No. 2 among 5A schools.