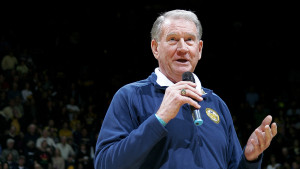 I had the good pleasure of meeting longtime NBA player Darrall Imhoff through the Fellowship of Christian Athletes, which he was a big supporter of and highly respect by those involved in FCA.

He played 12 NBA seasons an was on the U.S. Olympic basketball team. Among his many basketball achievements was winning the 1959 NCAA title with the Cal Golden Bears.